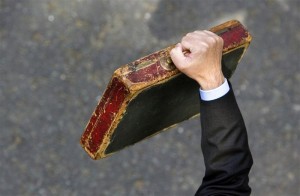 Britain’s Chancellor of the Exchequer Alistair Darling holds Gladstone’s old Budget box for the cameras outside 11 Downing Street, before delivering the annual Budget to the House of Commons in central London April 22, 2009. Darling is set to deliver the gloomiest budget in a generation on Wednesday, as government borrowing soars to a record high and the economy shrinks at its fastest pace since World War 2. REUTERS/Chris Ratcliffe/Pool (BRITAIN POLITICS BUSINESS)