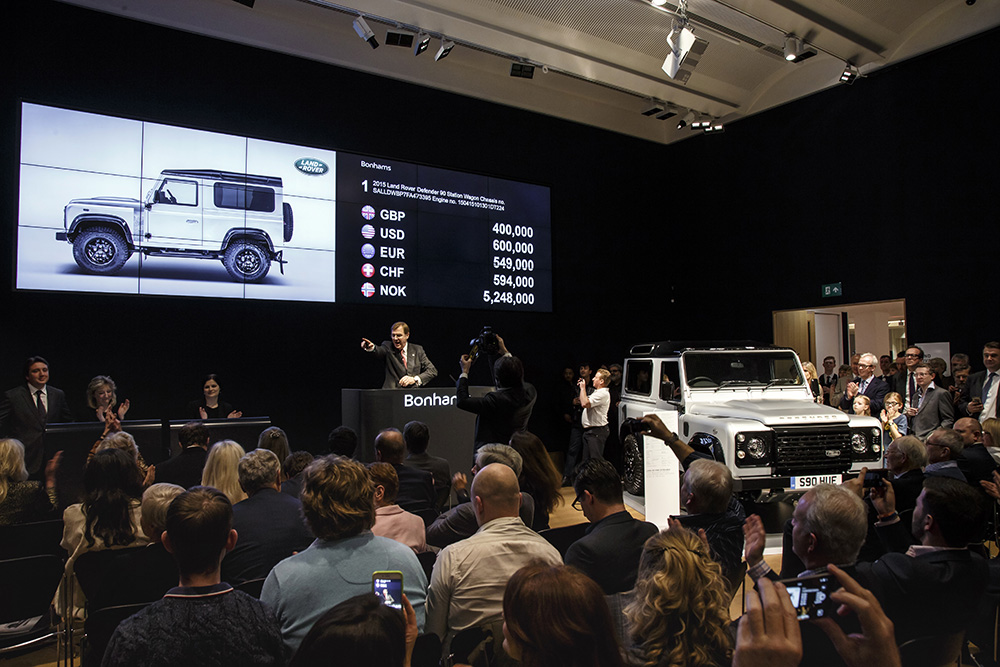 The one-of-a-kind 2 millionth Land Rover Defender sold for a record £400,000 at a charity auction at the prestigious Bonhams last night – with all proceeds being donated to Land Rover’s humanitarian and conservation partners: the International Federation of Red Cross and Red Crescent Societies, who will use the donation to help communities in South-West Nepal to improve how they tackle natural disasters, and the Born Free Foundation who plan to use the funds to support the “Project Lion Rover” wildlife conservation initiative in Meru National Park, Kenya.

“Defender 2,000,000” was built in May by an all star cast of brand ambassadors and people from Land Rover’s history including Bear Grylls, Virginia McKenna OBE and Stephen and Nick Wilks – sons of the founders of Land Rover.

Features designed especially for the car include the “Red Wharf Bay” graphic embossed into the leather seats and “No 2,000,000″ stitched into the headrests. A bespoke aluminium plaque, signed by everyone who helped assemble the car is fitted to the driver’s seat plinth. The one-of-a-kind Defender is finished with S90 HUE registration plates – a reference to the first ever pre-production Defender registration HUE 166.

“Earlier this year, we had the opportunity to turn a milestone Land Rover into a true collector’s car. With the expert help of my SVO team and a handful of willing Land Rover ambassadors, we created something unique and very special. Tonight’s sale will go down as part of our history. Of course, Defender has a future and will live on in its own right. But the original Series Land Rovers and Defenders will also continue to thrive through our Jaguar Land Rover Heritage division.” – John Edwards, Managing Director of Jaguar Land Rover’s Special Operations